Is My Softener Wasting Salt?

Water softeners are commonplace in industrial and institutional settings. These units utilize salt to ideally eliminate the hardness of the incoming water. Since salt usage is essential for softener function and has associated environmental and financial costs, it is important for its consumption to be monitored and optimized.

Excessive salt usage can oftentimes be the result of leaking valves or improper controls leading to overflowing brine systems, causing highly concentrated and highly valued salt water to be lost before even entering the regeneration process. Your brine system may pass the visual test – no obvious leaks and modern sophisticated controls – but we commonly find that even new softener systems may use 2x or more salt than is needed!

Often the culprit is that higher than necessary concentrations of brine flow through the resin during regeneration, or the brine flows through for too long of a time period. In these cases, the excess salt just ends up wasted down the drain.

To obtain optimal salt usage, softener systems must first be programmed so that the regeneration cycle matches the demands of the resin, and then maintained for proper working order.

Water usage is straight forward and linear. The amount of salt used is directly dependant on the amount of soft water produced. A softener will soften a set amount of water before it needs to regenerate. Using less soft water will require less regenerations, leading to less salt used overall.

The level of hardness has a linear effect on salt usage. A high hardness water source will require more salt per gallon of soft water than a lower hardness source. For example, a water softener supplied with 400ppm hardness would require twice as much salt to soften the same amount of water as it would if it was supplied with 200ppm water. This is because the resin exchange sites would become bound with hardness ions twice as fast, requiring twice as many regenerations.

The overall level of TDS (Total Dissolved Solids) in the incoming water will dictate how much salt is needed to force the resin to regenerate. In general, the higher the TDS in the incoming water, the more salt is required per regeneration. This relationship is not linear and the effect is only significant for water qualities with TDS greater than 500ppm. 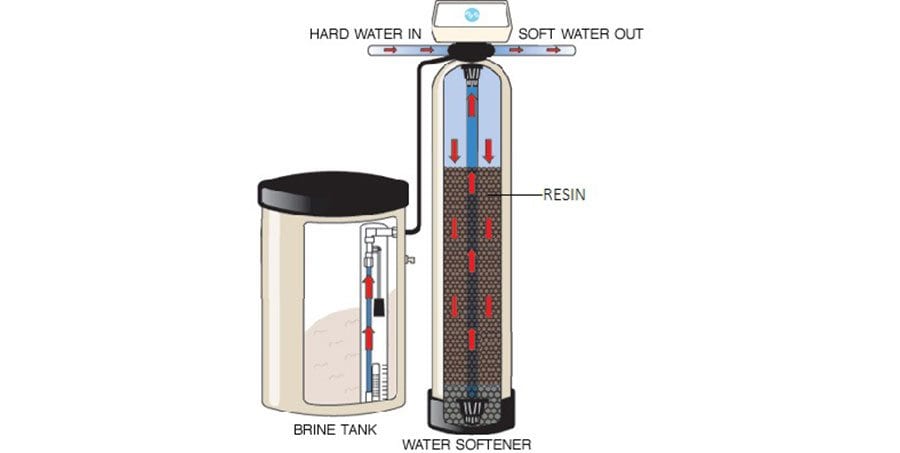 The capacity of softener resin is a very important consideration when working on optimizing salt usage. A higher salt dosage during regeneration will result in a higher grain capacity in the resin, allowing the softener to process more gallons of water before requiring a regeneration. However, the relationship between salt usage and grain capacity is non-linear. Therefore, using a lower salt dosage and regenerating more frequently will result in higher salt savings.

This reduction in capacity would increase the regeneration frequency by 10%, yet it would reduce the salt used by over 30% per regeneration.

For applications where increased regeneration frequency is practical, lowering the salt dosage and resin capacity can have a major effect on salt savings. However, factors like increased wear and tear on the unit, increased water usage, and lowered brining time must be taken into consideration. It is also important to be aware that different water qualities require different minimum salt dosages, below which hardness leakage can occur resulting in trace hardness. This trace hardness may be unacceptable for some applications (i.e. coil tube boiler). Therefore, this method must be carefully evaluated in consultation with your water treatment professional.

Even minor malfunctions with your softening system can cause major salt wastage. A few tips for spotting water softener malfunction are listed below:

If a softener is consuming salt, but not properly softening the water resulting in hardness being present, it is wasting salt and not serving its purpose.

Water leaking from the valve-head can be a sign of internal wear, which can result in poor performance and increased salt usage.

Water leaving the brine tank will take the salt with it. Brine tank overflow is caused by unit malfunction, which may be intermittent, so check for salt stains on the floor and ensure the water level is below the overflow height.

It is normal for salt usage to vary slightly as water consumption goes up and down, but large spikes in salt consumption can be a sign of a malfunction.

An elution study involves measuring the drain line salt concentration throughout the regeneration cycle. Plotting the measured concentration versus time will allow for a clear visual as to whether the brining system is functioning properly, and whether or not the softener is using the optimal amount of salt. An example elution study is shown below.

The graph on the left shows an optimal elution curve, while the graph on the right is an example of an elution study performed on a suspicious softener. The curve on the right demonstrates the unit was overdrawing brine. As a result, the brine draw was reduced, and proper function was restored, resulting in an approximately 50% reduction in salt usage.

Soft water is vital to many applications and can improve system operations while greatly reducing costs. However, it is important to understand that they come with financial and environmental costs. Actively working to reach and maintain optimal salt usage can go a long way in reducing the overall cost of operating a softener.

Interested in learning more about softeners? Read What’s Inside your Water Softener: A Closer Look at Resin

Meet DuBois Technical Representatives at BOOTH# 5449, May 14-16 at EASTEC, to help shape your business at the East Coast’s premier manufacturing event.  We will feature our leading our leading metalworking fluids, process cleaners, rust preventatives, paint pretreatment and water treatment solutions for cooling, boilers and wastewater.

The acquisition of the Water Treatment Solutions division of Triwater Holdings LLC, and its Klenzoid, Eldon Water, Chemco Products and Nashville Chemical brands, expands DuBois position in Canada and enhances our solutions for the institutional, light industrial, food and beverage and natural resources markets.

St. Joseph Mercy Oakland and Eldon Water, a recent acquisition of DuBois Chemicals, implemented a program to save a projected 665,000 gallons of water annually.  For Earth Day this year, the hospital was awarded a $10,000 check by Eldon for being a sustainability leader.